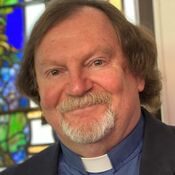 Tim Hall began his ministry at the Trinitarian Congregational Parish of Castine on November 1, 2011

Tim is a Maine native, born and raised in Augusta.  His childhood interests included music, boy scouts, and all things aquatic, and Tim became an all-state trumpet player, an Eagle Scout, and a well-trained lifeguard and swimming instructor.  Tim went on to study music education at the University of Southern Maine, and taught music in schools Downeast.  Meanwhile, his other two interests led him to work several seasons at some of Maine’s wonderful summer youth camps, and then to a lifeguard position at Reid State Park.  It was then that his career paths collided – Tim was offered a permanent position as a full-time state park ranger – and he left the teaching profession for a career with the Maine State Park system.  Tim’s park career spanned more than 30 years in several assignments, the last one as a senior administrator for parks and historic sites in northern Maine.  In 2003 Tim earned a Master of Public Administration degree from the University of Maine, and he set about working on a terminal degree, with hopes of teaching environmental ethics at the college level.

That was not to be, however.  A lifelong Christian and lay leader, Tim began to sense a call to Christian ministry, and in 2005 began studies at Bangor Theological Seminary.  He retired from state service in 2008 to study full-time, and accepted a call to pastor the Frankfort Congregational Church while still in seminary.  Tim graduated from BTS in 2011, and was ordained as a minister in the United Church of Christ in response to his call to the Trinitarian Congregational Parish of Castine.